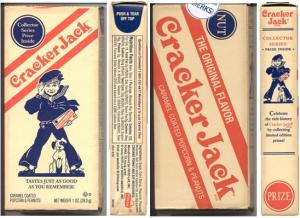 Cracker Jack and Related Memories: A Childhood Story– Part II: Now, in 1953, a snack box of Cracker Jack was really BIG! It was a rectangular cardboard box, 4 inches by 8 inches by 1 and 1 half inches, covered with a veneer of red, white, and blue waxed paper with a picture of Sailor Jack and his dog whose name was_______? I’ll bet that none of you remember or know Sailor Jack’s dog’s name! I thought he was the cutest dog; his picture was on every Cracker Jack box. At the time, I didn’t believe a dog like that really existed, and if he did, he could only have been owned by some rich city kid.  The only dog I knew at the time was our dog Buster who was a mixed hound with sad eyes and floppy ears. He was friendly enough but was dumb as a box of rocks, and didn’t do much but collect ticks. BINGO on the other hand—yes, that was Sailor Jack’s dog’s name. If Bingo did exist, he clearly had a personality. You could tell by just looking at his picture on the Cracker Jack box. One ear was erect, and the other drooping; one eye was black, and the other white. He was clearly a smart dog, sitting at attention while Sailor Jack saluted! Cracker Jack in those days would melt in your mouth! It was molasses-based, caramel popcorn with roasted, Spanish-style peanuts—YUM. Also in the box, and just as important as the candy popcorn itself, was a toy. Cracker Jack toys were amazing! They ranged from plastic tractors, cars, helicopters, soldiers, animals and whistles, many with moving parts. They also included bracelet charms, puzzles, and toy train cars. Not only were they really fun, but never did you get a repeat; every toy was original. To open the box, every kid learned after their 3rd try to ignore the “Push and Tear Off’ label at the top because both the peanuts and toy always settled to the bottom. Opening the box from the bottom would instantly reveal the toy, and then the peanuts would shake down and mix with the popcorn as you ate it. Now, how many boxes of Cracker Jack do you think an eight-year-old kid could eat during one church picnic? (To be continued)