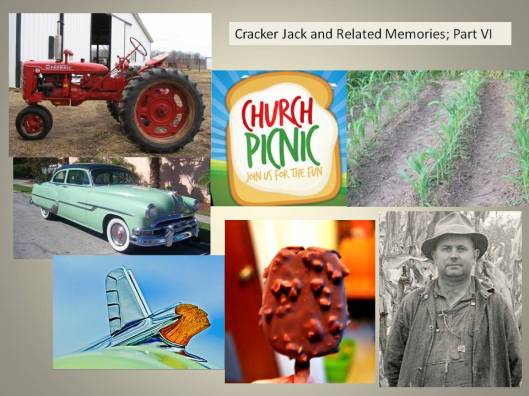 Cracker Jack and Related Memories: A Childhood Story– Part VI:  My Dad had me driving tractors at an early age. That was common for farm boys during the 1950s, especially boys with 4 older sisters. But, to be fair, these particular sisters were pretty good tractor drivers as well. By age 8 I was cultivating corn with the Farmall Super C, affectionately called the C-tractor (photo). It required a keen eye and steady hand to keep those little corn plants (photo) passing between the cultivator shovels day after day. Staying focused on thousands of corn plants per hour would have been intolerable by the end of the week but for the certainty that today was Saturday and tomorrow was church picnic Sunday (photo)! My Dad (photo) was very religious and rarely worked on Sunday. But when the crops were threatened by weather, he made the sign of the cross, asked God’s forgiveness, and did what he had to do. Or, in some cases, had me do what I needed to do, even on church picnic Sundays. I was crushed when the family loaded up in the 1953 Pontiac (photo) with the Indian head hood ornament (photo) and drove to the picnic while I drove to the corn field on the C-tractor. As I watched corn plants pass through the cultivator shovels hour after hour, and with little else to think about, I was obsessed by the thought of all I was missing—the play, the toys, the ice cream the Cracker Jack! Toward the end of the day and from a distance I saw my Dad at the end of the corn row with something in his hand. He had returned from the church picnic and come out to check on me. Approaching closer I could see it was an ice cream bar on a stick that he held between the thumb and stiff index finger of his left hand! Still closer, and out of the wrapper, I could see it was my FAVORITE ice cream bar with chopped peanuts embedded in the chocolate that surrounded creamy, vanilla ice cream (photo). At the end of the corn row, I jumped off the tractor, and reached for the ice cream bar in my Dad’s outstretched hand. Now, it took my Dad almost an hour to drive from the picnic to the corn field on this hot, summer day. With my arm out-stretched and fingers ready to grasp the wooden stick of the ice cream bar, I watched in slow-motion horror as the ice cream, inches from my hand, slipped off the stick and splashed into the soft earth I had just plowed. We were both in shock staring at the inedible, gooey mix of soil, chopped peanuts, and muddy vanilla. Then I heard my Dad say, “drive for another hour and then come home for supper.”  I started down the corn row, and when I was pretty sure he couldn’t hear me over the sound of the tractor, I cried like a baby. During that hour before supper I pretty much got over feeling sorry for myself as another 10,000 corn plants passed through the cultivator shovels; Mom prepared a great fried chicken supper for the family; and Dad went to the store and bought TWO, very frozen, ice cream bars. To be continued.