“Just over 10K miles on my tires; I should be able to make it to Oregon and get a new set at a discount at the rally,” I thought, as I prepared to leave. I knew the front tire was cupped a bit, but as the windscreen vibrated more and more through central Iowa, I figured it best to change them out before I got into the Rocky Mountains.

After he put on a new set of Bridgestones, I asked Dave at Sioux City BMW what he thought about the cupping on the old front tire. “Not a big deal compared to the cords showing on the rear tire,” he said. “Good thing you stopped; you wouldn’t have made it across Nebraska with that rear tire.” “On average, those Metzlers are good for 8K miles; what is your mileage on these,” he asked. “11K,” I said a little sheepishly.

Sioux City is at the confluence of IA, SD, and NE. I took Route 12, “The Outlaw Trail” through NE just south of the SD border. The road runs along the Missouri River a good part of the way. According to the interpretive sign on the SD side of the bridge (photo), Lewis and Clark camped just within this scene. I was greatly surprised how much I enjoyed traveling across Nebraska. Yeah, it was long, straight, windy, and hot, but a great ride none the less. 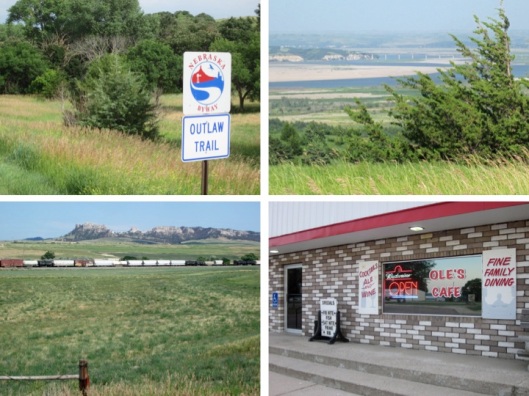 It snuck up on me! The 40 mph crosswind and 100 degree heat sucked the water out of me before I realized it. The breeze was still blowing as I returned to camp at Niobrara State Park from Ole’s Cafe where I had the walleye special. But at 2 am, with no breeze, temps still at about 90 degrees, very uncomfortable, short of panic, but very concerned, I realized I was dehydrated and couldn’t get my core temp down. I grabbed my water bottle, walked a quarter-mile in the starlight  to the water hydrant , stripped naked, and alternately poured water over my head and drank deeply (I know, I would have been a frightening sight for anyone who happened by).

I felt great the next morning, and I followed that train (photo) part way toward the Idaho border.

2 thoughts on “CC7-Nebraska was hot—”