According to the WILD Foundation, “wilderness is a natural system that is mostly biologically intact. Evidence of minor human impact or indications of historical human activity does not disqualify an area from being considered wilderness.” With that definition, an average person would surely conclude that Dryberry Lake and its surrounds are “wilderness”. 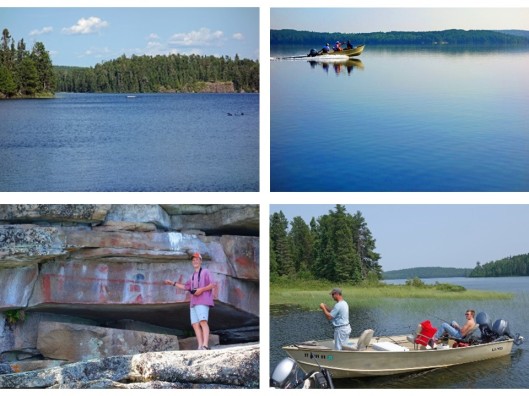 I fished and camped on Dryberry Lake a number of times. The last time, during the course of a week on this 40,000-acre lake, I did see at a distance one other boat—hardly enough human activity to change my perception of this place as “wild”. Reinforcing the feeling of wildness are endless vistas of water and forested shoreline; lake water as clear as a bottle of Perrier; native forests of spruce, pine, balsam fir, aspen and birch; myriad wildlife including loons, bald eagles, mink, black bear, and moose; and a variety of native fish that need only a minimum amount of coaxing with rod and lure to “volunteer” for a night’s fresh fish dinner.

“I really want to catch a lot of big fish”, said my grandson James as we approached our rendezvous point with my brother Don, his grandson Ethan and friend Jeff near the Canadian border.
“No worries, James”, I said. “Just be careful of the teeth in the mouths of those big snakes (northern pike) you are sure to catch.”
As it turned out, with some fine coaching from Don, James caught the biggest fish, the smallest fish and the most fish.

1. James, Ethan, Jeff and John each with one of their catch.

Camped in Don’s primitive cabin on an island 13 water miles from our launch point, we motored each day to favorite fishing spots, while discovering some new ones. Small mouth bass, northern pike and an occasional lake trout or muskie were tricked by our lures. In between setting hooks in the mouths of these unsuspecting fish, we absorbed the smells, sounds and quiet of the environment around us. Exhausted after a hard day fishing, a cold beer, a dip in the lake, a fried fish dinner, and tall tales, made taller by good wine, completed the daily expedition. 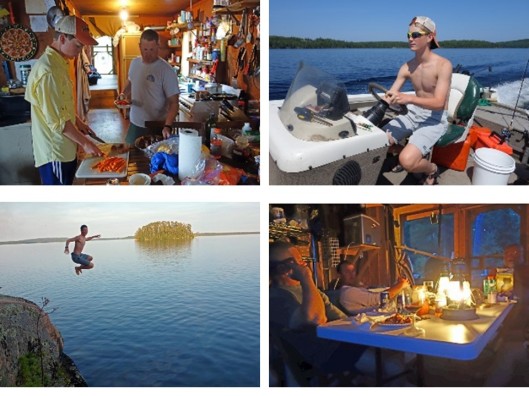 Wild? Yes. But untouched by human hands? Not really. And I am not talking about the fascinating petroglyphs, not far from camp, painted on rock escarpments by First-Nation Peoples. During the mid-20th century a small dam was built to connect multiple smaller lakes that created Dryberry. The flooding that resulted opened vast areas for logging the virgin spruce and pine for railroad and bridge construction. To the untrained eye it appears that the forest has recovered, but I maintain it won’t reach its original stature and productivity for centuries due to post-harvest slash fires that consumed the thin organic soils atop the hard granite of the Great Canadian Shield.

But only forestry geeks like me contemplate what the Dryberry environment might have looked like today had better stewardship been exercised while logging. Given the miracle of nature’s resilience it is truly wild again despite the greater exposure of the Shield’s hard granites and the hyponutrition of the lake’s waters.

In no way did my musings of past human influences and my deliberations about wildness affect the enjoyment of this place and the camaraderie of six like-minded men bonding through sparks of a campfire on a clear, starlit night. Many thanks to the guys who hauled boats 1000 miles to make it possible.

2 thoughts on “Fishing in Ontario”