She is dauntless, precocious, curious, and pretty. Her name is Emily, age 17, a rising high school senior. She is my granddaughter (click on photos to enlarge). 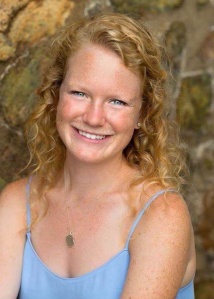 One day out of the blue: “Hey Grandpa, would you take me on a motorcycle ride to Indiana? I’d like to tour Purdue University where you went to college, and I would like to see where you grew up and meet some of the extended Burger family.”

Stunned at the request, it took me longer than it should have to sputter an affirmative answer. I mean, how many 17-year-old girls with a job and busy social life want to spend a week with their granddad riding 1500 miles on a motorcycle across multiple states in the heat, rain, and cold to a place they have never been? And how many have but a casual interest in their immediate family much less grand uncles and aunts and second cousins?

Her interest in meeting extended family brought to mind an article I read about the relationship between self-awareness and heritage. According to the experts, knowing the background from which one comes helps develop a clear perception of ones strengths, thoughts, beliefs, motivation, and emotions; you are happier, more self-assured, and you are better able to empathize in personal and professional relationships. I doubt that was one of her conscious objectives, but I shouldn’t underestimate her; she is a smart girl.

“Ahhh—sure, Sweetie, I would be happy to take you anywhere anytime,” I said, while suppressing a tinge of reservation. “But I think we need to do an extended shake-down ride to be sure you have the right equipment and we both have an idea of what we are getting into.” In a word, I was delighted by her request. What grandpa wouldn’t be?

Highway 35 is a great way to travel SE to NW through Ohio. It is a fast, open road displaying some of Ohio’s best scenery. I enjoyed it immensely, but I sensed my passenger was half asleep after a late night the previous day. Maybe more than half asleep as her helmet banged against mine a time or two. But during the 270-mile ride to Chillicothe, OH, our first day’s destination, alertness increased as we got our intercoms working and she bluetoothed music from her iPhone to her helmet. A visit to Hopewell Culture NHP and dinner at the Old Canal Smoke House ended a good first day.

The City Market in downtown Indianapolis was bustling as we pulled in for lunch. So many yummy food choices. We did Greek. Always vigilant of weather conditions in the humid, stormy Midwest, my iPhone radar prompted a quick lunch in order to beat a squall heading east between us and our Lafayette destination (we beat it with just a few drops streaming across our face shields). After checking in to the Union Hotel, a walk around the Purdue campus, some sushi for dinner, and an improv comedy show by students at Union Hall, we were primed for an early morning, pre-arranged campus tour the next day.

I had not been back to the Purdue campus since I left with my MS Forestry degree in 1975 (40 years! Ouch!). Yes, it was different. It is a beautiful, impressive campus; I believe Emily liked it.

The fountain at the Purdue Engineering Quad

By noon we were zipping toward Terre Haute for a 2 pm tour of Indiana State University (of Larry Byrd fame) that Brother Don arranged for us. Don taught at ISU for 35 years in the Aviation Technology department. After the tour he treated us to one of his great steak and garden vegetable dinners followed by a breakfast of whole-hog brats, biscuits, and home-made pepper jelly.

Emily more than tolerated my new hobby of visiting National Park sites during my travels. I bought her a National Parks Passport Guide and she got her first cancellation stamp at Shenandoah National Park, VA, during our shake-down ride. In addition to Hopewell Culture NHP and Dayton Aviation Heritage NHP, we enjoyed a quick visit to George Rodgers Clark NHP in Vincennes, IN, after a drive through tour of Vincennes University where I studied for two years (50+ years ago! Double Ouch!).

Emily in the Dubois County Museum standing under a Burger paper seed corn bag. Seed production and sales were part of the Burger farm business

For me, it was about nostalgia; “a wistful desire to return in fact to a former time in one’s life.” For Emily, I am not sure; perhaps to simply sate her curiosity. But I think it was more than that by the time we finished our visit of Jasper, IN, where I was born and raised, the 5th generation on the same farm homesteaded by my German great, great, grandfather and family. We toured the local museum, the church and school I attended as a child, did cemetery tours for both Burger and Wehr families, and, among all the commercial development, tried to conjure an image of the farm as it was 50 years ago. I was especially nostalgic for a luncheon sandwich that I used to buy for 25 cents at Snaps Restaurant just across the street from the grade school—a delicious breaded tenderloin extending far out around the Hoagie bun. Yes! Same sandwich! Same taste! Different price $8.99!

My sister Dorothy is kind, giving, gracious, and bossy enough to have her way and get things done. Besides putting us up for the night, she arranged a gathering of 15 of the clan at the Schnitzelbank, the local German restaurant. The food was great and the family were fun. Whether or not meeting great aunts and uncles and 2nd cousins enhanced Emily’s self-awareness as speculated above remains unknown, but she clearly enjoyed the visit. 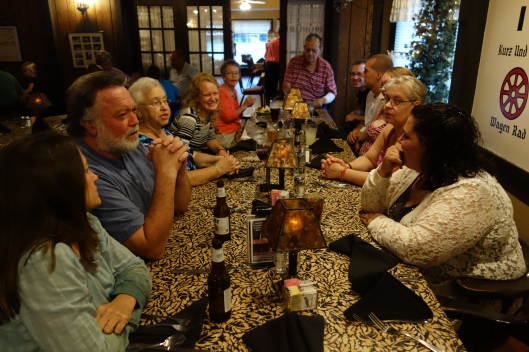 Part of the Burger Clan (but only 15 of 115 descendents of my Mother and Father); at the Schnitzelbank Restaurant in Jasper, IN

A cold front pushed the humidity east out of the Midwest and dropped the temperature by 15 degrees as we saddled up for the two-day trip back to Virginia. We caught up with the front as we reached Lexington, KY, so we did a drive through tour of the University of Kentucky and had a great lunch at the County Club Restaurant that describes its offerings as “contemporary American comfort grub offered in rustic-chic digs.” It was good! Ten minutes from South Charleston, WV, our destination for the evening, we did catch the front and got slammed by a brief shower. Perfect. Emily needed to know what it was like riding in the rain and a dry, warm hotel room was minutes away.

At the start of the final day of the trip we did a drive through of the University of Charleston then headed east toward VA. Perhaps the most beautiful stretch of interstate highway east of the Mississippi River is I-64 from Beckley, WV, to Lexington, VA. It is a landscape of forested mountains and river valleys dotted with occasional villages and open fields. By now the sun was shining through broken clouds, but not enough to temper the chill of 62 degrees and 25-mph wind gusts.

Back in Charlottesville, VA, it was a great ride

Just before noon, 1500 miles from where we began, we pulled into Emily’s driveway in Charlottesville, VA. She was a great passenger and companion. I told her I would take her again anywhere anytime and meant it sincerely. She responded with the same. As we pulled off our helmets her parents approached. I could see the relief in their faces; their baby was home and safe once again. Of course, it meant a lot that they would trust me with the safety of their precious child on such an adventure. It makes an old man smile.

6 thoughts on “A Granddaughter’s Request”