My G-G-Grandfather Jacob Burger was a watchmaker who wanted to be a landowner and farmer.

After establishing an apparently successful watchmaking and jewelry business in Cincinnati, OH, and after retrieving his wife and children from Germany, Jacob moved his family about 170 miles west, as the crow flies, to the small village of Jasper, Indiana.

Why he would move from the comfort of the city that had a large, friendly, immigrant German population to a relatively primitive farming community might be puzzling except for the fact that many German immigrants lusted after the opportunity to own their own land, a right and privilege not available to them from where they had recently come. But why Jasper, Indiana? My somewhat informed guess as to why he moved to this particular place is because he, among many others, was recruited by the Reverend Joseph Kundeck, the first Catholic priest to serve the Jasper community. 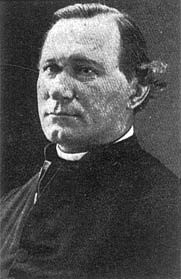 According to the authors of History of Pike and Dubois Counties (Goodspeed Bros. & Co, Publishers, Chicago; 1885), there were only a dozen Catholic families in Dubois County prior to 1840. A small log house not far from the Patoka River served as a church. The bishop from the Diocese of Vincennes commended this small congregation to the care of its first resident pastor, Rev. Joseph Kundeck.

Father Kundeck was born in Croatia in 1810. After he was ordained a Catholic priest, he immigrated to Indiana in 1837. The following year he was installed at Jasper and in short order built a large brick church. Rev. Kundeck was an energetic entrepreneur for the church, having established parishes in Ferdinand, Fulda, Troy, and Celestine, among others.

At the time, much of the land in Dubois County was still owned by the government, but could be bought for a modest amount of money. Rev. Kundeck traveled by horseback to the cities of Louisville, Cincinnati, and Pittsburgh where he urged German Catholics to come to the “Garden of Indiana.” His colonizing efforts were very successful, and through the following years thousands of Germans settled in this area around Jasper. 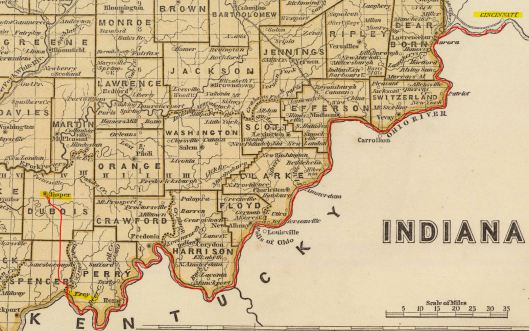 Around 1855, Jacob Burger and his family moved from Cincinnati, OH, to Dubois Co., IN, via the Ohio River then by land from Troy to Jasper.

The seductive power of both the Catholic Church and the opportunity to become a landowner trumped any security and familiarity Jacob and his family may have had in Cincinnati. Jacob, his wife Theresa, son William (11), daughter Anastasia (4), and daughter Caroline (1) steamed down the Ohio River to the busy port of Troy; they then traveled by oxen and wagon to Jasper.

Oral family history maintains that the family lived in Jasper while Jacob sold watches and jewelry for several years before buying a farm about 1.5 miles south of the village. Indiana land transfer records show the following:

Jacob Burger finally became a landowner and a future farmer in America.

Two weeks prior to Jacob’s purchase of his new farm the Rev. Joseph Kundeck passed away on December 4, 1857, at the young age of 47; he was buried in his parish cemetery in Jasper. The well-known Cincinnati German newspaper, the Wahrheitsfreund, published several articles commemorating his death and praising him as a great missionary and recruiter of German Catholic immigrants from near and far.

1 thought on “BF3: From Cincinnati, Ohio, to Dubois County, Indiana”