Google “Million Dollar Highway.” My daughter claims that the first entry will be “Dangerous Roads.” If available, click on “Images” of the highway. I remembered traveling it in a rented car years ago and thought it might be great fun on my motorcycle, maybe as much fun as the road to Pikes Peak.

A motorcycle ride up Pikes Peak has been on my “bucket list” for a long time. At 14,115 feet elevation, Pikes Peak is called “America’s Mountain,” perhaps because it is so accessible. It forms a stunning backdrop for Colorado Springs and Garden of the Gods. It ranks 31st in elevation among Colorado’s 54 “Fourteeners”. It is a fully paved, 19-mile toll road with many switchbacks and a guardrail here and there. Races up the mountain are held for every mode of transportation including foot, bicycle, motorcycle, auto, etc. The record for motorcycles is 12 minutes. We just poked along and enjoyed the scenery while keeping one eye on the road part of the time. It was a lovely morning at the summit, but a storm rolled in by noon, which spoiled the view for lots of folks who we met on the way down.

Jim and Richard at summit of Pikes Peak, CO

We didn’t escape the storm, however. On the way to Colorado Springs BMW for a new set of tires for Richard’s bike, it caught us unprepared without rain gear. It was a vicious little squall with high winds and a little bit of hail. While waiting for the tires to be installed we did laundry at an adjacent laundromat and dried what we had on as well. Don’t ask.

The temperature above Ouray, CO, the next morning was 46 degrees as the three of us ascended the Million Dollar Highway. The third rider was friend Jeff who, despite leaving Virginia Beach three days after we, caught up with us on the open highway after doing several 800-mile days (Navy Seal).

I am pretty comfortable on my machine, but I admit that I creeped out when in the outside lane I saw nothing but space off the edge of the road with no guardrail. In places, the road hangs on the cliff face hundreds of feet above the canyon. I got used to it. Good thing, because it went on that way for miles. At one point the road was confined to the inside lane as the outside lane collapsed off the mountain—not while we were there!

This highway from Ouray to Silverton and on to Durango is a beautiful road and a must do unless you are acrophobic. There are few places in the U.S. Rocky Mountains that you will see such spectacular views of gorgeous landscapes and have such an “exciting” time doing it. 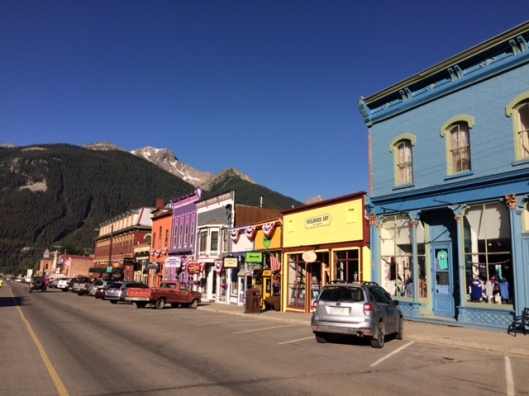