Which of these two cities is the Provincial capital of Saskatchewan: Saskatoon or Regina? If you said Regina, you are correct, of course, and you are thinking: “Everyone knows that.” Well, not everyone, because I thought it was Saskatoon—maybe because of it’s more central geographical location, size, and the fact that the University of Saskatchewan is located there.

My father-in-law was born in Regina, the child of German immigrants. He was 10 when the family moved to Chicago, but he didn’t become a US citizen until his mid-twenties. The story goes that his future Italian in-laws, immigrants themselves, insisted he become a citizen before they would consent to the marriage of their daughter. Family lore associated with Regina made me curious about the place, and now I had the opportunity to see it. 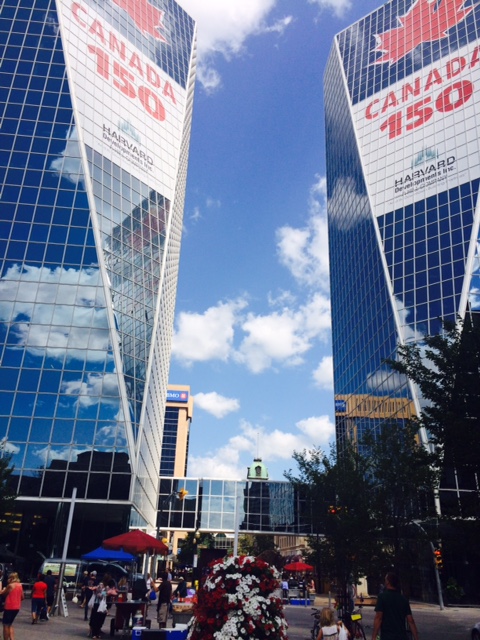 I entered “Regina” in my Navigator IV GPS and it took us to the central business section next to a large tree-covered park. The place was buzzing with activity. The Wednesday Farmer’s Market was in full swing; for a snack, Richard bought a box of British Columbian cherries that were nearly the size of apricots. We sat on a park bench, ate cherries, and enjoyed park scenes of outdoor classes, a large yoga group doing moves that I thought would hurt, and tourists taking photos of monuments and Canada’s 150 anniversary celebration signage displayed across two large buildings.

“What is that beautiful building?” I asked Richard via helmet intercom as we rolled south out of city central. “Let’s check it out,” he said. A quick left turn put us in front of the Saskatchewan provincial legislature building, a beautiful structure. There we met two couples, about our age. Shirley and Larry were from Buchanan MI, visiting their long time friends Bev and Ethel from Regina. A long, friendly conversation ensued whereby Bev and Ethel taught us much about the history and culture of Regina including the fact that, yes, Regina is indeed the provincial capital of Saskatchewan.