That’s me standing next to Jack Riepe (JR) at the Finger Lakes BMW motorcycle rally at Watkins Glen, New York. 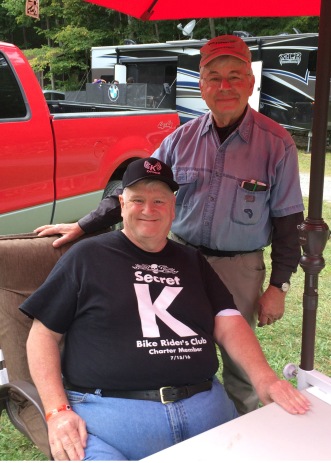 Jack is a humorist, author, and public speaker who writes a regular column for the BMW Motorcycle Owner’s Association magazine. Jack says he writes to the common man and to the uncommon woman about motorcycling and a certain kind of riding culture. His prose is a bit too racy at times for gentlemen and gentleladies, but I enjoy his humor and he captures the aura of motorcycling and the allure of racing through space above two wheels.

“The motorcycle was born in the 19th century, in the choking renaissance of the industrial age, when men sought liberation from the horse, but not from the mad excitement of the gallop.” JR

The sun just broke the horizon when Richard and I left the mountains of Virginia for the Finger Lakes BMW rally in New York. The back roads in the valley along the Allegheny Front in West Virginia were nearly deserted so it was easy to relax and become one with my machine.

“I was seduced by the wind, the sound of the engine, the thrumming of the tires, the dancing of the headlight, and by the road itself.” JR

On this beautiful day, riding through a bucolic, pastoral environment and enjoying the ride, my mind wandered to a place decades ago when I first contemplated purchasing a motorcycle. It was the late 60’s. Fast, beautiful motorcycles from Japan were arriving on the market, like the Honda model 750CB 4 cylinder 4 stroke. I was never impressed by the American or British machines of the era that would shake the fillings from ones teeth and leave an oil puddle wherever it was parked.

One day my Army flight instructor, having recently returned from service in Germany, rode up on a BMW R69s. I was instantly smitten. It was black, quiet, smooth, and had that Teutonic presence that suggested reliability, steadfastness, and authenticity. I wanted one. And I believed I wanted it for the right reasons.

“The fundamental mistake I made in the acquisition of my first motorcycle was assuming it would make me more attractive to the dangerous kind of women I craved.” JR

Richard usually leaves the trip planning to me as long as I promise that we roll into our evening destination by 4 pm, in plenty of time to relax with a cold beer. And he has a thing about spending more than 9 hours in the saddle (must have something to do with becoming a certain age). So, I made a reservation in Somerset, PA, with a “few” planned sightseeing stops along the way.

The battle at Fort Necessity in the summer of 1754 was the opening action of the French and Indian War. George Washington, at age 21, was a newly commissioned lieutenant colonel who started the war and lost its first battle. This would be the beginning of a seven-year World War that would end with the removal of French power from North America. Of course, several decades later, George was more successful in his battles with the British.

Richard on the left on his BMW K1200GT, and my BMW R1200R on right at the gate of Fort Necessity near Ohiopyle, PA.

Just up the road from Fort Necessity near Ohiopyle, PA, Edgar J. Kaufmann, Sr., a wealthy merchant from Pittsburgh, built a summer home he named Fallingwater. It was designed by Frank Lloyd Wright and is one of Wright’s most widely acclaimed works. Perhaps better than any single work, Fallingwater exemplifies Wright’s concept of organic architecture: the harmonious union of art and nature.

Our tour of Fallingwater ended at 5:15 pm, already an hour past Richard’s “quitting time.” The main road to our hotel in Somerset seemed too roundabout so I thought a shortcut through the back roads would get us there a bit faster. My GPS showed it was fairly direct, but it didn’t show the blacktop degrading to a trail with little gravel. Richard swore it was 20 miles of ruts, but I figured it was 2 miles at the most with a rut here and there. I guess when you ride a 700-pound BMW K1200GT behemoth you have your own interpretation of road condition and distance. Besides, some say K-bikes and their riders simply whine a lot.

“One summer night, I had 52 drinks while plotting my editorial career’s high-points and went into the garage to confer with a noble BMW K-bike. I fired up the bike until it spoke in fluent conspiracy. Some say a K-bike whines like a mother-in-law caught in a leg-hold trap. (It doesn’t. I compared the two in an experiment and discovered you can listen to one all night.).” JR

There were 500 like-minded BMW riders at the rally at Watkins Glen State Park. They were mostly BMW riders with an occasional Honda Goldwing, Moto Guzzi, and Harley Davidson rounding out the assemblage. There were live bands, fire-side story telling (lies), Finger Lakes wine, a micro-brewery tent, a Ben and Jerry’s ice cream stand, German sausage on the grill, bike and parts venders, and Jack Riepe hawking his newest book, Conversations with a Motorcycle. I bought a copy.

I had a nice chat with Jack. Of course we couldn’t avoid some chatter about K vs. R bikes. The first BMW built in 1923 was the R32 with horizontally opposed cylinders. The engine evolved over time but the distinctive shape and engine sound remains in BMW’s newest models. In the mid-1980s BMW built in-line multiple cylinder engines referred to as BMW K-bikes.

There is a friendly “mine is bigger/better than yours” rivalry among R- and K-bike riders. Note the big “K” on Jack’s shirt (top photo). He autographed my copy of his book: “Dear James—From a K-bike rider to an R-bike rider—better days are coming for you. Best Wishes, Jack.”

I am not alone in my admiration of Jack, his humor, and his way with words. But we in the BMW riders organizations worry about him a bit. Jack has had some serious health problems in the past several years and has put on a lot of weight; at the rally he swore he would be back on his K75 next summer. I told him I knew he would.

The next day was shrouded in a steady mist and fog as Richard and I rode north to Seneca Falls to visit the Women’s Rights National Historical Park and the Women’s Hall of Fame. My visor was clear; I was warm and cozy under my rain gear; the traction of my Michelin Pilot 4s felt secure on the wet and puddled pavement. There was harmony among the sound of the engine, the gentle splash of the droplets on my windshield, and my state of mind.

“Riding through dense fog, there was no sense of going up nor down on the steeply pitched roadway in the soothing murk, just a peculiar state of detachment in which the world was me, the bike, and eerie illumination of the instrument cluster.” JR

Get well, Jack; you always say it better than anyone.