In 1921 the United States and Germany signed the Treaty of Berlin ending WWI, baseball legend Babe Ruth broke the career home-run record, and Adolf Hitler was named the leader of the Nazi Party.

Many famous people were born in 1921 including Peter Ustinov, John Glenn, Sugar Ray Robinson, Alex Haley, Donna Reed, Charles Bronson, and Camille Riche Andrews. Actually, Camille Andrews was famous only within a very small circle of relatives and friends, so if her name doesn’t ring your memory bell, no worries.

Camille was born in Chicago on October 12 to Felix and Lucille (Catale) Riche, who each immigrated to the United States from Italy. His surname was actually spelled Ricci, but as happened with many non-English ethnic groups, surname spellings were often anglicized by design or by default. This immigrant couple settled within the Chicago Italian community, learned English, worked hard, had six children and pursued the American dream.

Camille had one older and one younger brother and three older sisters. With a bit of sarcasm, her sisters called her “Princess” because she was known as her Father’s “favorite”, and because she was very proper in demeanor and fastidious in dress and appearance (especially pink) despite being from a family of modest means.

She fell in love with John Andrews, the son of Germans who immigrated to Saskatchewan, Canada, then to Chicago when John was 10 years old (His father’s surname was Andrus, but anglicized to Andrews). Camille’s parents were initially concerned about their likely marriage. Poor John had two fundamental flaws: He was of German heritage and wasn’t a US citizen. He couldn’t do much about his heritage, but his English was excellent (better than his future in-laws’). So now at the age of 24, he studied for US citizenship so he might appease the parents of his true love. The story goes that Camille quizzed him unceasingly on citizenship knowledge and requirements during their courtship.

John passed the test, Camille’s parents relented, and they were married in 1941. They moved to Long Island, NY, where John worked as a professional welder in the Navy shipyards building vessels for duty in WW II. He was eventually drafted and served in the Army but never left the U. S. In 1944 they had their only child, Carol, Camille’s own little “princess” (with time, her little “princess” became my wife and Camille became my mother-in-law. Although I am of all German heritage and given I was already a U. S. citizen, I had no problem obtaining her blessing).

After the War, the family of three moved from New York back home to Chicago to be close to family and old friends. Camille was a High School graduate and a life-long student of good communication and social grace. She worked as a telephone switchboard operator back in the day when the operator participated in each call.Women dominated this sector of the workforce because they were more courteous then men and could be paid 30% of a man’s salary. 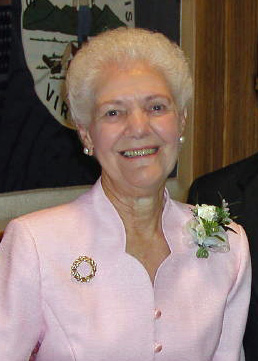 Always seeking to improve her opportunities and make a wage she thought she deserved, she secured a sales management job with Sears Roebuck Co from which she eventually retired.

One summer day in 1985, I flew one-way from Blacksburg, VA, to Chicago. A large U-haul truck, already loaded, was parked next to their already-sold home. They were both retired now and their only daughter and three grandchildren were in Blacksburg. We asked them to join us.

We departed Chicago at 4 am the next morning for the 14-hour trip back to Blacksburg. They had bought a house in our neighborhood four down from ours. As we bumped down Interstates 65, 64, and 77 toward Virginia, Camille and John alternated riding with me in the truck and driving their car behind me. That meant hours alone with my mother-in-law. Moving from Chicago was an emotional, transitional time for her. She and I were already close, but this long road trip tightened our bond. Perhaps it’s not fashionable anymore to call mothers-in-law Mom, but I always did. I believed a relationship is largely determined by what you call each other. I assured her that this move was the right thing and that the family couldn’t wait to welcome her arrival in Blacksburg.

Her family was “everything” to her. Living four doors down, she could see her grandchildren every day. Almost always in a pink outfit, she didn’t miss a single concert, play, band recital, and graduation or marriage ceremony. She doted on them yet held them to high expectations. When great-grandchildren were born, she flew all over the country to be there to help. 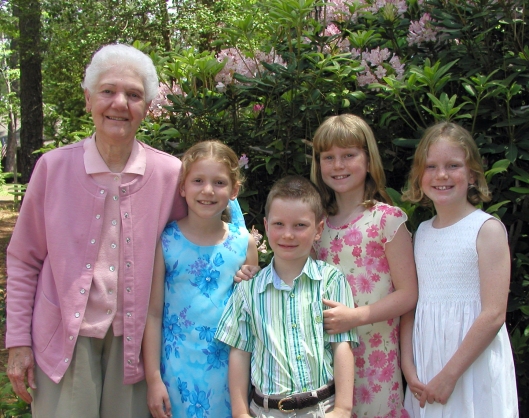 Camille with four of her seven great-grandchildren, Lauren, James, Cecelia, and Emily

She lived in Blacksburg for 32 years, longer than anywhere. She was active in multiple organizations and volunteered for events that invariably gave others cheer. After her husband passed away she lived alone for another 11 years until age 89 when, still very vibrant and healthy, a stroke partially paralyzed her requiring assisted living. She lived for another seven years, until age 96, when she passed on November 21, 2017. Her “princess”, three grandchildren and seven great-grandchildren kept her life worth living. Maybe not the most famous person born in 1921, she will still be missed by many.

She was buried in her favorite pink dress. She will be, forever, our Lady in Pink.

6 thoughts on “Lady in Pink”