Nearly every American child of the 1950s and 60s knew the Tasmanian Devil. It was featured as a cartoon character from the Warner Brothers Loony Tunes series. “Taz” was generally portrayed as a ferocious, albeit dim-witted, omnivore with a notoriously short temper and little patience. 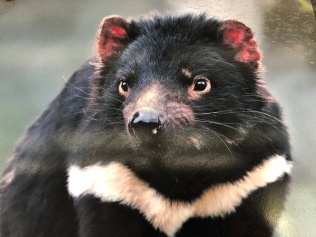 Photo of a real Tasmanian Devil.

He had a an enormous appetite, eating anything in his path. He had the ability to spin like a vortex and bite through nearly anything. He did have a weakness; he could be calmed by almost any music and became kind of a lovable creature.

We kids didn’t know where Tasmania was, but knew the Devil was a vicious beast not to be reckoned with. It wasn’t until several decades after I saw the last Tasmanian Devil cartoon that I visited Australia for the first time and really studied its geography. I discovered that Tasmania was Australia’s only island state an hour’s flight off the southeast corner of the mainland. I visited Australia a second and third time, but never made it to Tasmania. Finally, on this fourth visit I am bound for Tasmania. Maybe I will meet the Devil.

A three hour drive to Charlotte, NC, a one-hour flight to Atlanta, 5 hours from Atlanta to Los Angeles, 15 hours from LA to Melbourne, Victoria, and another one hour flight to Hobart, Tasmania, not to   mention many hours between flights. Geeezz, it is a long way to the bottom and the other side of the world, even by jet aircraft. It’s not just the distance and the season (you depart in Spring and arrive in Autumn), but you skip a day; we left on Tuesday and arrived on Thursday. But not to worry, we will get the day back when we return.

Australia is a fascinating place. Most of the continent is desert or semi-desert yet it has one of the richest biodiversity in the world. Australian forests are mostly made up of evergreen species, particularly eucalyptus trees in the less arid regions; wattles replace them as the dominant species in drier regions and desert. Among well-known Australian animals are the platypus and echidna; a host of marsupials, including the kangaroo, koala, and wombat, and birds such as the emu and the kookaburra. Australia is home to many dangerous animals including some of the most venomous snakes in the world. The people? Some of the nicest, most friendly folks you will find anywhere.

Tick, tick, tick, tick—— It is what I heard as we pulled out of the rental car lot at the Hobart airport. I stopped, inspected the ticking right rear tire, and picked some gravel out of the tread. Then we headed for Port Arthur on the Tasman Peninsula.

Sleepy Bay, on the eastern shoreline of the Tasman Peninsula.

As we pulled into the parking lot of the hotel, window down, I heard it again: Tick, tick, tick———-. This time, the three-inch roofing screw, totally embedded in the tread, was at the top of the tire in full view. “What a way to begin our car tour around Tasmania,” I thought.

The rental car companies have an arrangement with the Tasmanian Auto Club. Within 15 minutes of my call to the Club, Richard appeared in his pick-up truck. He told me he grew up on a farm just 5 km down the road. He collected and restored antique tractors so we had a nice long chat about many common interests while he changed the tire, pulled the screw, and plugged the hole. 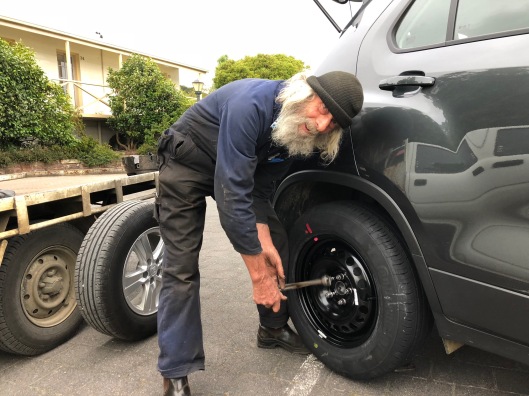 This is Richard, a friendly Aussie employed by the Tasmanian Auto Club. He changed our tire and plugged the hole in the tread caused by a 3-inch roofing screw.

The tire issue was no big deal. It gave me an opportunity to meet another friendly Aussie and be reminded again how much we have in common despite living on opposite ends of the globe.

Now its on to see more of Tasmania—-on our spare tire!