That was my riding buddy Don marveling over the low cost of his excellent lunch at the Smokey Mountain Diner in Hot Springs, North Carolina. Don always gets the “best deals”, but this time I one-upped him: “My huge, delicious BLT with the homemade chips was only $3.95,” I said, “but I want the place to stay in business so I left a $3.00 tip.”

Don and I on our BMW R1200s, along with Gary on his Yamaha FJR 1300, and Marc on his Triumph Tiger 850 were on our way to a motorcycle rally near Robbinsville NC at the base of the Great Smoky Mountains National Park, not far from the confluence of the NC, TN, and GA borders. This is motorcycling country with campgrounds, motels, restaurants, and other services catering to motorcyclists. And it is the location of the notorious Tail of the Dragon, a steep road with 318 curves within 11 miles up/down a mountain. The “Dragon” is renowned throughout the country for its challenge and thrill of “dragging the pegs” through many of the curves despite the 30 mph speed “suggestion.” Two years ago I ran into a young, Canadian woman at a rest stop near Asheville. She was riding solo from Nova Scotia on a snorting, stripped-down Harley Davidson wanting directions to the “Dragon.”

“Yeah,” she said. “It has been on my bucket list for a while. I couldn’t get my riding buddies to go along, so the day before yesterday I just threw my leg over this beast and pointed it south.” I gave her directions and wished her a safe ride. She waved after clutching for second gear. I heard the CLUNK over the sound of the exhaust and the Harley rattled and snorted out of the parking lot. To the Dragon or bust.

Route through the Blue Ridge Mountains from Blacksburg to the Iron Horse Motorcycle Lodge.

But we needn’t go to the bottom of the Smokies for scenic, curvy roads. For that matter, we could have ridden the Blue Ridge Parkway the whole way to our destination. We took a faster route that was almost as scenic and arrived at the Iron Horse Motorcycle Lodge with enough time to set up our tents before dinner.

The Iron Horse Motorcycle Lodge and campground. Those are our tents along the stream.

The Lodge was sponsoring the annual Horizons Unlimited (HU) rally. HU is a loosely-connected long-distance motorcycle traveling community that holds rallies throughout the world. Travelers meet to inspire, inform, and connect with others by presenting their travel adventures from places far and wide. There were presentations throughout the long weekend, but the promise of a beautiful day, despite early morning fog, enticed an early departure from the Lodge for a local 150-mile ride through the mountains.

Our 150-mile route across the Cherohala Skyway to Venoire TN then up the Tail of the Dragon. 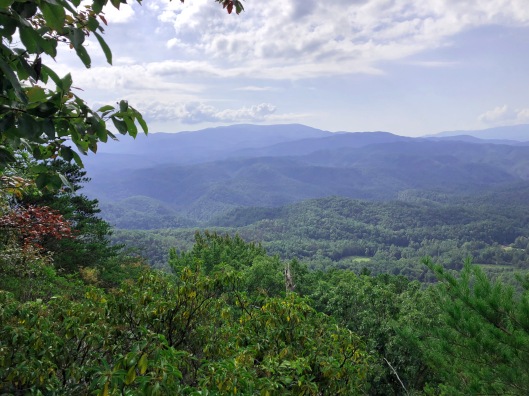 Can you see why they are called the Blue Ridge Mountains?

The Cherohala Skyway is a road featured as one of Discovery Channel’s Top 10 Motorcycle Rides in North America. It winds up and over 5,400-foot mountains for 18 miles and descends another 23 miles into the deeply forested backcountry of Tennessee. The Skyway is becoming well known in motorcycling and sports car circles for its long, sweeping corners, scenic views, and cool summer breezes. Except for an obscuring, cold cloud at the peak, it was a beautiful ride from Robbinsville, NC, to Tellico Plains, TN. Fortunately, we avoided the local Miata sports car club of old geezers, wont to poke along in 40-car trains.

Tellico Grains Bakery at the base of the Cherohala Skyway. A great lunch stop.

My riding buddies tolerated my penchant for lunchtime coffee shop bakeries where one can enjoy a nice latte or cappuccino with a specialty sandwich and a freshly-baked dessert. However, none of us were disappointed at the Tellico Grains Bakery. Nor was anyone else in the long line proceeding and following us at the counter. Lunch is reason enough for a visit to Tellico Plains, but one can spend several hours fascinated by the Native American and pioneering history and collection of artifacts in Charles Hall Museum, one of the best local museums I have enjoyed.

Don and Dolly at the Cherohala Skyway Visitors Center in Tellico Plains. He wanted to take her home only because he wanted her guitar.

On the ride back towards the bottom of the Dragon, we enjoyed a visit at Sequoyah Birthplace Museum. If you are familiar with Cherokee History, you will remember that Sequoyah was a father, soldier, silversmith, statesman, and creator of the Cherokee writing system, his biggest claim to fame. He faced down social derision and tribal suspicion, and endured family rebellion while believing he could create a written language for the Cherokee. Only his daughter Ahyoka believed him, and, remarkably, he taught her his written language. During a tribal council, Sequoyah asked the disbelieving elders for a random story. He transcribed the story in the script he created, then asked his daughter, unaware of what was happening, to come to the meeting. She read the story from the script Sequoyah had written, just as the elders had dictated. The disbelievers became believers and the rest is history.

“Hey Don,” I called over our helmet intercom as we approached the Dragon, “you and Marc come on around me and lead us up the Dragon, I don’t want to hold you back and spoil your fun.”

Don is a better rider than I. The last time I followed him up the mountain I barely kept up, dragging my foot pegs on many of the 318 curves. The road earned its name from its curves being said to resemble a dragon’s tail. Some of the Dragon’s curves have names like Copperhead Corner, Wheelie Hell, Gravity Cavity, Beginner’s End, and Brake or Bust. During the summer months, the Blount County Rescue Squad hangs out on the Dragon on the weekends for the inevitable.

“No, go ahead Jim,” I heard back, “I’ll hang back and pick up pieces of the Yamaha on the way up and hang them on the “tree of shame.”

Map of the Tail of the Dragon showing its 318 curves.

It was a great ride up, that is until we caught up with an old geezer (probably in his seventies) in a pickup truck. He slowed us down so much we could hardly keep our two wheels upright! There are lots of places for slow traffic to pull off, but this guy was clueless. So, we pulled off and waited a while, but quickly caught up with him. But, no worries, it was still fun, I thought, as we pulled off at the top of the mountain for our obligatory photo in front of the large, metal, dragon sculpture.

The metal dragon at Deal’s Gap. Gary, Marc, Don, and Jim’s BMW (I am taking the photo; I survived the Dragon).

Across the road is Deal’s Gap Motel and gift shop containing all sorts of Dragon paraphernalia including tee shirts, stickers, pins, etc. to show that you slew the Dragon. If the Dragon slew you, pieces of your bike would be hung on the “tree of shame” in front of the hotel for all to see. The tree is for real, and it is loaded with bits and pieces of almost every brand of street bike created as well as many brands of sports cars. A sign on one large, gray piece of plastic said: “Brand new 2018 Porsche 911 Carrera Rental.”

The “Tree of Shame” at Deal’s Gap at the top of the Tail of the Dragon. Bits and pieces of motorcycles and sportscars that failed to slay the Dragon.

The following morning we rode down the Dragon into TN for a loop ride through the Smoky Mountains National Park. The sun was shining, the road was dry, and no one slowed us down. If I held back my riding buddies, they were kind enough not to mention it. A right turn at the base of the Dragon put us on the Foothills Parkway that ends near Townsend, TN.

Gary, Marc, Don, and Jim taking a break on the Foothills Parkway, TN.

We entered the Park at Townsend and rode the Little River Gorge Road to the Sugarlands Visitors Center at the junction of Hwy 441 that bisects the Park. Clingmans Dome, the second highest point in the east, was our intended stop, but low clouds over Newfound Gap suggested that the Dome would be totally obscured. Perhaps for the best, because now, at 2 pm, we were all hungry for a late lunch.

Our 150-mile route around and through Smoky Mountain National Park.

Departing the Park near Cherokee, I made another pick. This time it was Sassy Sunflowers Bakery and Café that claimed it was the “best lunch in town.” A 12-ounce prime rib was on the menu for dinner back at the Lodge, so for this late lunch, Don and I split a Turkey Reuben on Rye and some Kolatchkies with cream cheese and berry filling. Yeah, it was a late lunch and I got hungry, but I’m glad I resisted breaking into the package of “nabs” I always carry in my tank bag.

Sassy Sunflowers Bakery and Cafe near Cherokee, NC on the edge of Smoky Mountain National Park.

Our ride that day was another 150 miles of great road and beautiful scenery. After a fine dinner at the Lodge, we watched a final slideshow of one man’s adventure to Alaska. The poor guy experienced 17 straight days of rain, but he told us he had a good time. I believed him. But I know he didn’t have more fun than I did during these four days, over 940 miles, with great company, excellent roads, wonderful food, and inspiring travel stories. “So many roads, so little time.”

The Floyd Country Store in Floyd VA. We stopped for coffee and pie, to listen to some live bluegrass music, and to reflect on the fun we had on our trip.

2 thoughts on “Slaying the Dragon”