I departed Blacksburg, VA, and after nine hours in the saddle, I arrived in Madison, IN, an Ohio River town that served as a gateway to the Indiana frontier. The Michigan Road, the first major thoroughfare S to N across the state (really just a muddy rut through Indian territories) ran from Madison on the Ohio to Lake Michigan. Like lots of places, advent of the railroad made river towns less important. But Madison is still a gem of a town.

The National Trust for Historic Preservation chose Madison as one of three Main Street Project Towns countrywide. First Lady Laura Bush designated Madison Indiana’s first Preserve American Community, and the town was recognized in 2001 by the National Trust for Historic Preservation as one of twelve Distinctive Destinations in the United States. Wow! I grew up only 2 hours away and it took me more than 50 years to finally have a look at this jewel!

I putted around town on Boxxer past the RiverRoots festival on-going next to the river. Bluegrass and country bands performed one after the other, and artisans’ booths competed with Madison’s Main Street finery. Every building is beautifully maintained, the urban trees and gardens are vibrant, and the shops suck you in. I have a keen eye for the places local folks dine, and in Madison the lunch spot was Hinkle’s Hamburgers. Except I had the fish sandwich with coleslaw; the old fashioned kind with 3 real filets sticking out both sides of the bread roll. And how convenient; the Madison Creamery was just across the street! Every flavor imaginable except my favorite! No worries; I am not that picky.

So what prompted a nine hour motorcycle ride to Madison, IN? Part of the Burger Clan met at Clifty Falls State Park adjacent to town for one of their summer camp outs. It was a nice opportunity to catch up with extended family and remind the youngsters they have an Uncle Jim.

These Burger Clan campouts are notorious for making it rain. I took credit for delivering some fairly nice weather, although the spell wasn’t entirely broken given a bit of rain the first night in camp. The reasonable weather made for some nice hikes to the falls and surrounds. Clifty Falls is a 60 foot ledge retreating north from the Ohio River escarpment into the southern IN plateau (an ancient marine seabed). It is surrounded by a beautiful mixed mesophytic forest, the kind with as many as 30 woody species per acre, not counting scores of herbaceous plants on the forest floor.

But most fun was had in camp: the old folks retold stories from the far past and bragged about their kids (the 40 somethings); the 40 somethings lamented their old age (pity, pity) and amused themselves with sophisticated campfire games like “tippy cup“; and the little ones ran around camp playing various games with little or no parental control (just as it should be). 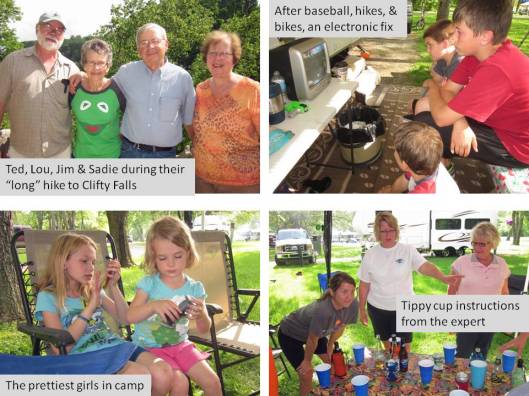 It was a great camp. What’s not to like? Lots of good food and drink—I bummed off everyone else; good stories; nice campfires; lots of laughs; well-behaved kids (except for the 40 somethings); hugs all around; and a sunny day for departure. I’ll hang out with this family anytime.