At the very edge of Europe, as far west as you can go in Ireland, is the Dingle Peninsula, once described by National Geographic as “the most beautiful place on earth”. We were there. It is a place of spectacular seascapes and landscapes shaped by the elements (photo). The land is rich with ancient history, with pre-historic sites and early Christian heritage. Except for the village of Dingle, which is a little fishing port with brightly colored houses, the other small farming villages are very isolated among fantastic landscapes (photo). 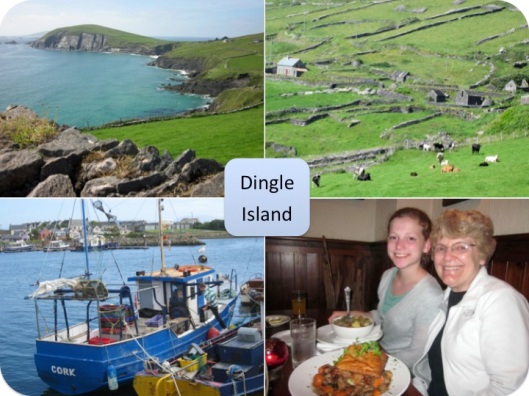 The Dingle Peninsula has one of he largest gaelic-speaking communities in Ireland. Less than 5% of the population speaks Gaelic, or Irish, as they prefer to call it, but the language is still a proud tradition. Around the peninsula we saw several Gaelic language schools where Irish school children spend summers learning their traditional language.

So far, it has been one of our favorite day trips. It was a long and exhausting drive and hike, which required some rejuvenation with traditional Irish stew (Lauren) and Irish lamb pie (Carol).