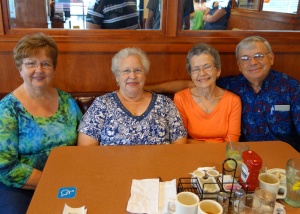 Sadie, Dorothy, and LouElla: Three of my five sisters; all sweet and lovable.

They called it “land of milk and honey” or “God’s country” or “heaven on earth”. Those were only several of many such references used by early immigrants to describe this area of southern Indiana during German-Catholic settlement in the early 1800s. These folks were a hard-working, creative, industrious people, and there is much evidence that their descendants are the same. Dubois County, Indiana, was my first stop on my three-week motorcycle tour of the Midwest. I grew up here on a farm just south of Jasper in the center of the County. The farm has since been incorporated within this progressive, small city, but three of my seven siblings, three of five sisters (photo), remain in the area, thus my visit.

But there was another reason for visiting. I was nostalgic for the place I knew during the decades of the 1950s and 60s and figured I could find it at the Dubois County Museum. I figured correctly, but was still pleasantly surprised and very impressed by its content. Well documented and richly illustrated were the history of early settlement, the formation of a Catholic community, the exploitation of the region’s hardwood forest for fine furniture manufacture, and the development of a progressive agriculture on the rich soils of the county.

Having been a local farm boy, it was the agricultural history that especially piqued my interest. The machines and other rural-living artifacts stored in barns across the county are nothing short of amazing. Thanks to David Kluemper, chief curator, many of these items have been retrieved, beautifully restored and presented (photo). Displayed were a selection of early American farm machines including the Kitten steam tractor designed and built by Florenz Kitten, a Prussian immigrant. Kitten, at age eight, settled in Dubois County with his parents and eventually built the Ferdinand Foundry & Machine Works where the Kitten steam tractor was built. 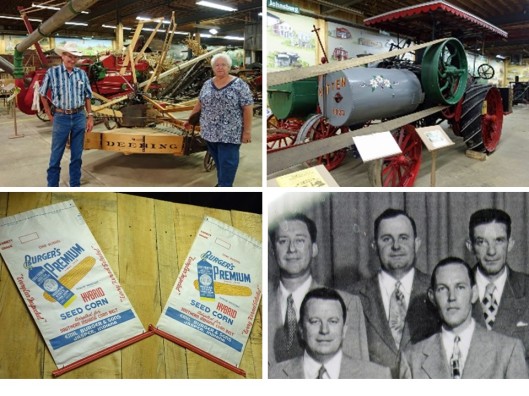 Making me feel really at home were the “Burger’s Premium” seed corn bags hanging on the wall of the museum. I personally helped grow, harvest, grade, and bag the corn that went into those bags. The production and sale of hybrid seed corn was a Burger family business begun by my grandfather August and my father Emil in 1938. The family sold seed corn in the region until 1973. In another section of the museum, Emil was pictured (center of photo) with his 8th-grade classmates during a class reunion sometime during the 1960s.

Departing the museum and wanting to experience one of the local eateries I knew as a kid, my sister Dorothy and I stopped at Ficht’s Bar and Restaurant, except that it was now called “The Headquarters”. There was no indication of its earlier name seen anywhere, despite the fact that the place had not changed in any other way. Neither the waitress nor the bartender could recall the previous name, but an old guy at the bar, between swigs of Pabst Blue Ribbon, informed the young employees of the history of the place on my behalf. The sandwich I had appeared the same as I remembered 50 years ago, but I remember it tasting better.

The family farm is gone; the local bars have changed their names; the once white, Catholic community is now highly integrated with people of many ethnicities and creeds; and many parts of town where I grew up are hardly recognizable. But the Dubois County Museum and all its curators and fine volunteers have captured the place I knew and loved; warm congratulations and many thanks for that. Oh yeah, my sisters! Still there, and still sweet and lovable as ever!

2 thoughts on “Land of Milk and Honey”