There was a steady rain at 7am in Jefferson City, MO, when we mounted the bikes. The radar showed “green” at our location with “yellow” enroute. Several locals warned us about hail that seems to come out of no-where.

The thunderstorms and rain showers actually began the day before as we approached East St. Louis. We skirted just north of most of them, but the air was so thick our windshields at speed squeezed out water droplets that streamed off the top and splashed the top of our helmets. The temperature was 93 when we reached the Mississippi River overlook of the Gateway Arch and St. Louis skyline. It is a beautiful view. 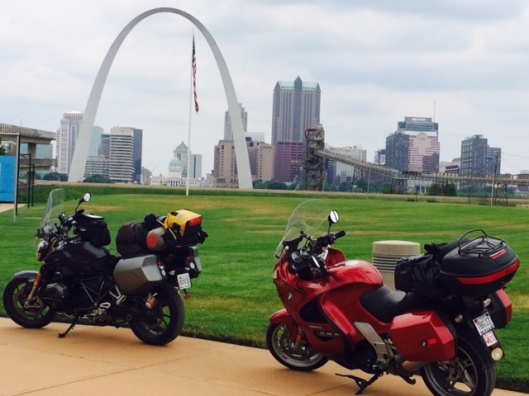 The next morning we broke out of the rain just west of Kansas City and had a nice ride to the Tallgrass Prairie National Preserve, managed cooperatively by the National Park Service and the Nature Conservancy. This 10,861-acre preserve protects a remnant of a once vast tallgrass ecosystem. Of the 400,000 square miles that once covered the continent, less than four percent remains. There was a herd of buffalo over the ridge, but the thought of a mile hike in motorcycle boots prompted our departure for the final 75-mile ride to Hutchinson, KS, our destination.

“Wherever you stop on the prairie to lunch or camp, and gaze around, there is a picture such as poet and painter never succeeded in transforming to book or canvas…..”