A motorcycle journey is about road, ride, machine, landscape, and especially nice people you meet along the way. The day before arriving at the BMW rally, it was about all of the above.

“Ride to Live Utah” publishes a ride difficulty map for all roads in the state. They are rated Easy, Moderate, and Difficult. According to the map, “Difficult” requires advanced riding skills; it includes steep grades and sharp, technical turns. Route 143 east of Cedar City on the way to Cedar Breaks National Monument was one of those. These roads force you to become one with your machine.

Cedar Breaks is a 3-mile wide amphitheater similar to Inspiration Point at Bryce Canyon. But unlike Bryce, this dramatic backdrop rises over 10,000 feet above sea level to the amphitheater’s rim, an amazing high point of geologic art. At this elevation, there are alpine vistas of colorful wildflowers interspersed with conifers including bristlecone pine, Douglas-fir, Engelmann spruce, and subalpine fir. The show of wildflowers in mid-July included larkspur, lupine, columbine, scarlet paintbrush among others. This was clearly one of our favorite places. 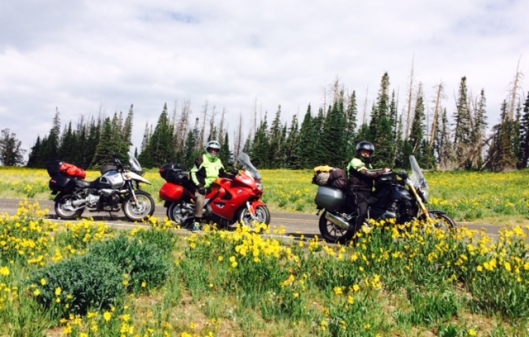 As we walked through the door of the Cowboy Corral restaurant in Elsinore, UT, for lunch, we were surprised to see and hear a couple of old cowboys strumming their guitars and singing “Cowboys Don’t Cry”. They would be Dale Barney and Jerry Gerlander who we meet toward the end of our lunch after we enjoyed a dozen or more cowboy tunes. 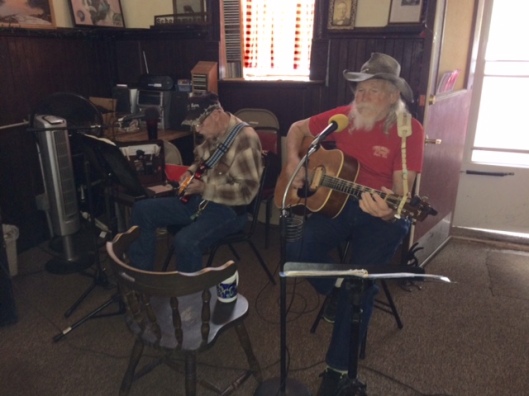 We had stopped for fuel and a quick check with YELP showed some interesting and lengthy reviews for the Cowboy Corral. As we pulled up next to the 100+ year-old building we weren’t certain it was for real. It was just as old inside as out.

Arlene, the owner, was a sweet lady who seemed puzzled how we motorcyclists found her establishment. I mean this place was really “local”. She had never heard of YELP and was amazed when we showed her the App and read her three of many fine reviews she had gotten over time. She was delighted and assured us she would have her grandchildren show her how to download and use the App. After some friendly chatter, we posed for a photo with Arlene and Dale and Jerry and wished them all many blessings and good luck. 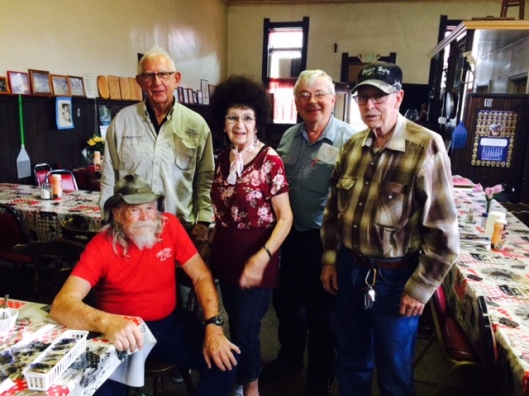