“How much gas do you have?” I asked Richard as we approached Valentine, Nebraska. “We still have 30 miles to go.” We had topped off our tanks at Wall, South Dakota before we entered Badlands National Park, then departed the park out the south gate immediately entering the Rosebud Indian Reservation. Gas was scarce along this route, and 91/93 octane was non-existent. “I think I can make it,” he said, “although my warning light just came on.”

The Rosebud Reservation is home to Sicangu Sioux, one of the seven tribes of the Lakota nation. The Lakota were the ultimate representatives of the Plains Indian culture with dependence on the buffalo for food, clothing, etc. The reservation has a beautiful landscape with productive grazing lands and fertile river floodplains, which belies the economically depressed condition of the Native Americans who call the place home. In any case, it was a great, scenic ride on good pavement with virtually no traffic.

The Niobrara National Scenic River passes through Valentine, NE. The river is known for its beauty, diverse fish and wildlife, geology and amazing fossils. It is also a superb canoeing river.

After topping off our tanks, we visited the National Park Service office that manages the river. We learned that Congress, in 1991, designated 76 miles of the river as part of the National Wild and Scenic Rivers System. The young Park Service employee enthusiastically informed us of the interesting interplay of politics among adjacent landholders, environmentalists, and government officials that ensured its protection, cooperation not likely in today’s political climate. From Valentine, Routes 12 and 20, Nebraska Scenic Byways, were a great way to traverse the state from east to west (avoid I-80; done that once with much regret).

FREE LAND! Was the cry. With the promise of free land, the Homestead Act of 1862 enticed millions to cultivate the frontier. Families, immigrants, and freed slaves flooded 10 percent of the nation’s land to chase their American Dream. After departing our hotel in Norfolk, NE, we enjoyed a nice coffee stop in Seward, home of Concordia University, Nebraska.

We then rode southeast to the Homestead National Monument near Beatrice, NE, the next stop on our National Parks tour. The Monument commemorates passage of the Homestead Act which allowed any qualified person to claim up to 160 acres of federally owned land in exchange for five years of residence. The roof line of the Homestead Heritage Center is meant to resemble a single bottom plow moving through the sod. The Center contains an amazing assemblage of artifacts and history associated with the lives of homesteaders. 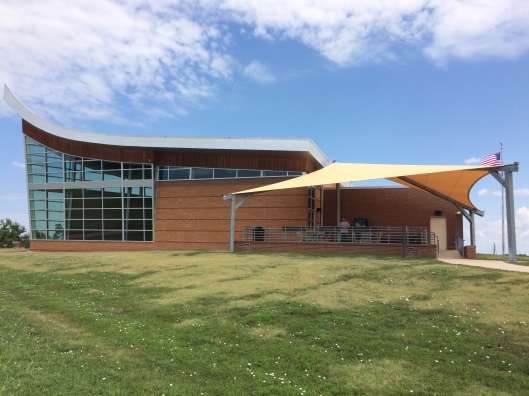 The Heritage Center at the Homestead National Monument near Beatrice, Nebraska

A final stop on our National Parks tour was Abraham Lincoln’s Home in Springfield, Illinois.

We know him as the sixteenth president, but he was also a spouse, parent, and neighbor who experienced the same hopes, dreams and challenges of life that we all do. The Park Visitor’s Center presents this man and the home and neighborhood he shared with his wife and children for 17 years. It is a lovely, peaceful place. But while in Springfield, be sure to visit the Abraham Lincoln Presidential Library and Museum. This was one of the best and most informative experiences we had. Besides the detail of his life and presidency, we were reminded of the character of this man through some of his observations; I yearn for a President such as him:

“Don’t worry when you are not recognized, but strive to be worthy of recognition.”

“He has a right to criticize, who has a heart to help.”

“Am I not destroying my enemies when I make friends of them?”

“Be sure you put your feet in the right place, then stand firm.”

“A house divided against itself cannot stand.”

“The probability that we may fail in the struggle ought not to deter us from the support of a cause we believe to be just.”

“I have always found that mercy bears richer fruits than strict justice.”

“Common looking people are the best in the world: that is the reason the Lord makes so many of them.”

“In the end, it’s not the years in your life that count. It’s the life in your years.”

“Let us have faith that right makes might, and in that faith, let us, to the end, dare to do our duty as we understand it.”