It was to be an “action-packed” three-day ride and outing! Three hundred miles on the Blue Ridge Parkway during October with stops at Boone, NC, the Linn Cove Viaduct, Grandfather Mountain, Mount Mitchell, the highest point in the East, Smoky Mountain National Park, Cherokee, NC, and The Wheels Through Time motorcycle museum! This could be any motorcyclists’ dream ride!

Mike, our tour leader, had us assembled at 6 AM under the yellow glow of the overhead lights in the Hardees parking lot in Christiansburg, VA. We were a random assemblage on/in two-wheel, three-wheel, and four-wheel machines. Mike warned us about the danger of deer on the road at this “O dark 30” hour, and Brian said a departing prayer imploring the good Lord to keep us safe during our journey, especially given the weather forecast. Speaking of the forecast, Jeff and Joan took some good-natured ribbing for “riding” their Audi SUV instead of their bikes. Jeff brought up the word “wimp” on his own so none of us needed to. 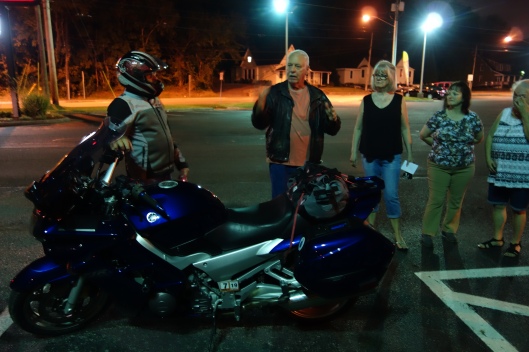 Mike giving a pre-ride briefing before heading out for our adventure on the Blue Ridge.

The skies were overcast, but visibility was excellent out in front of my strong halogen headlight of my BMW R1200 as we headed for Floyd, VA, where we would ascend to the top of the Blue Ridge escarpment. I actually like riding at night.  It can be exhilarating given that all one’s senses tend to be in overdrive. But riding at night with fog or rain? Not so much! Just as we approached the Parkway, visibility suddenly went from clear to murky. I nearly blew by the entrance as I struggled to keep a taillight in view in front of me.

The Blue Ridge Parkway is notorious for variable weather. Rain normally falls on only one side of a ridgeline, so one can oftentimes see multiple weather conditions in a single view. Fog may come in the form of a billowing, wispy mist, or as a haze so thick and heavy that it appears solid. It often rises from the Piedmont, up the escarpment and condenses to a steady drizzle for miles along the Parkway.

Fog rising up the Blue Ridge escarpment condenses as rain or drizzle at the top.

And so it was on this morning as we headed south: fog, then rain, then fog plus rain. On occasion, when we descended into a saddle between two peaks and dropped below the cloud layer, we could see flashes of fields and forest, damp but appealing.

Thick fog on the Blue Ridge Parkway (Photo by Joan)

Riding for hours while seeing not much more than the taillight of Chris’ Indian in front of me, I called out to Gary via our helmet intercoms: “Hey Gary, the Linn Cove Viaduct should be just ahead.” “Actually Jim, I think we are on it right now,” Gary replied. Just then there was a small break in the mist and I saw a glimpse of the forest below the guardrail.

I had visited the Linn Cove Viaduct on a previous trip. This is what we hoped to see, but on this ride, the fog was so thick we rode across it without even knowing it!

This seven-mile section of the Parkway was finally completed in 1987 after a 20-year delay as environmentalists, landowners, engineers, and architects sought a design that would protect the fragile habitat of adjacent Grandfather Mountain. The viaduct hugs the face of the Mountain and is recognized internationally as an engineering marvel. Despite riding on it, we were not to see it on this particular trip, but the adjacent Visitor’s Center had a detailed video on its history and construction.

We waited a while at the Visitor’s Center to let a particularly hard rain shower pass. We had lots of time to come to the obvious conclusion that there was a zero percent chance of a view from atop Grandfather Mountain, another item to cross off our trip agenda. The rain shower passed but we caught up with it on our ride back to Boone. Now about as wet as we could get, the thought of a warm hotel room and hot shower loomed large in my mind as we pulled off the Parkway.

“How many for dinner,” the hostess asked as we entered Mike’s Inland Seafood Restaurant. That is the actual name of the restaurant, and whoever Mike is or was, he was not related to Mike our tour leader. “Fourteen,” Mike replied. “Excuse, excuse me!” the hostess stuttered, a bit alarmed. “Do you have reservations?” “No,” Mike replied, as the rest of the 14 of us squeezed through the door. As it turned out they opened up a private, dining hall and were happy to have us. After all, we are nice folks and we weren’t dripping wet with puddles at our feet as we were back at the hotel. 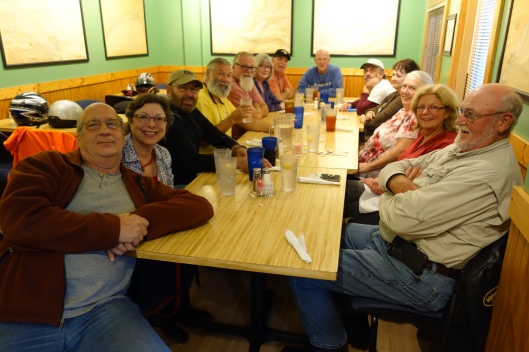 The gang at Mike’s Inland Seafood Restaurant: Jeff, Joan, Gary, Chris, Larry, Genevieve, Mike, Brian, Michael Lindy, Martha, Beverly, Mac. All nice folks, except for Jeff who took up more than his share of the table.

Dinner may have been the highlight of the trip. We were there a long time, all around a large table, laughing and telling stories while eating great seafood. It seemed everyone had a great time despite no alcoholic drinks consumed. Riding at night in the rain requires most of our wits to be at play, and we were all sensible people—sensible, judicious, prudent, logical, and wise: that’s what advancing age offers most of us. Although one could have asked why we were on this trip in the first place!

Looking across the table over my breakfast cereal bowl I said to Gary who was sipping his hot tea: “I hope Mike and the gang don’t think we’re quitters, which is worse than wimps, you know, but we will just need to live with that moniker.” The rain was steady all night and there was no indication it would let up. Moreover, Michael (the hurricane) would be upon us the following day for our six-hour ride back to Christiansburg. Motorcyclists can be stubborn about “the ride;” we are loath to give it up. I mean, what’s a little rain?  It was the coming hurricane that invoked those attributes of old age, like judiciousness, wisdom, and all that good stuff. When word got out among the gang that we were aborting the trip and heading home after breakfast there was a unanimous “me too” movement. There were no “quitters” in this group, just sensible old folks.

Packing up under the eve of the hotel entrance in Boone, NC. Wet before we began.

You already know without me saying so that the rain never stopped. It was just a question of hard it rained and how thick the fog was. Two hours into the four-hour ride back we pulled over at the Virginia Welcome Center at the base of Fancy Gap. I said I wanted to check my Maps App to be sure the road up the mountain was open, but mostly I needed to use the bathroom AGAIN. There’s something about being wet and riding in the rain! With just two hours left to reach home, we lined up to depart the Welcome Center and Sensible Jeff and Logical Joan tucked in behind us in their warm, dry Audi SUV. Who was it who had the audacity to think they were wimps? 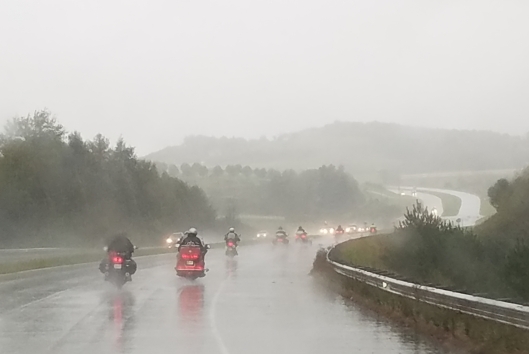 On the road home in the rain, but ahead of worse to come. (Photo by Joan)

You know what they say about experiences in life; that is, those moments that remind us we’re alive. There are things we might regret doing, but the truth is we’re far more likely to regret things that we didn’t do. I did not regret going on this ride. Life is about moments, connections, memories, and places, and is most magical when we put ourselves “out there”. This ride had its moments, I made connections, and I will certainly remember and talk about it, probably more than other  memorable rides I’ve taken. It was an experience that reminded me I was alive. Thanks to Mike, Gary, and the rest of the gang who made it enjoyable and a “ride to remember.” And thanks to Brian for his pre-ride prayer; we all made it home safely.

7 thoughts on “Rainy Ride on the Blue Ridge Parkway”