How the plane landed with less than 100 feet of visibility I don’t know; he was obviously a good pilot, which I was thankful for. The weather was about what I expected: drizzle, fog, and about 55F. But by afternoon it was sunshine and blue sky! Despite jet lag and only 3 hours of bad sleep on the plane, we did a lot on our first day in Dublin. The artwork in the National Gallery was awesome, and a tour of Trinity College with its 16, 17, and 18th century buildings was the day’s highlight along with a view of the Book of Kells housed in Trinity’s library. The Book of Kells, written on calfskin by Irish monks during the eighth century, is a color-illustrated copy of the four gospels. It survived a series of Viking raids and is now the 2nd most visited sight in all of Dublin after the Guinness brewery.

Dublin is a vibrant city filled with friendly people. Like Washington DC, no building appears to be over 6 stories tall. Many streets downtown have been cobblestoned for pedestrians only. Every other storefront appears to be a pub, bistro, coffee shop, or restaurant, all with special eats and drinks. 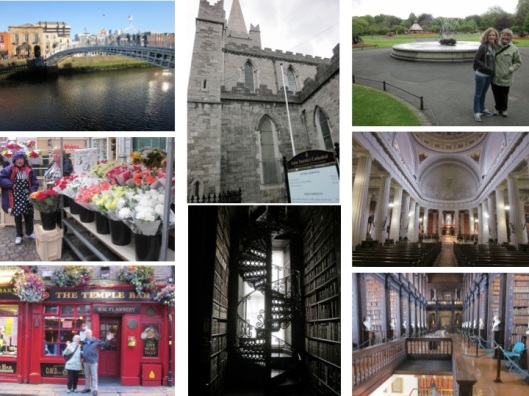 Lots of history here, but it will take more than a couple of days and a few pints of Guinness to sort out the complex Irish/English relationships over the centuries. But I am trying—especially with the Guinness.