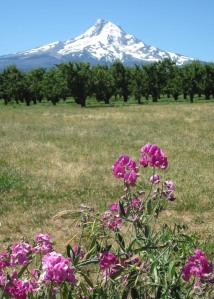 “I know it’s cold and foggy now,” I told my riding buddies, “but I am pretty sure the fog will lift before we get to the mountain.” Twenty minutes down the road, there stood Mt Hood in all her glory against the morning sun and clear sky. Our destination was the Timberline Lodge on the side of Mt Hood, the 2nd most visited sight in OR (after Columbia River Gorge). Built by the CCC program in 1937 and renovated several times since, it is truly a magnificent structure. Ken, Jeff and I had breakfast in the Cascade dining hall (fancy), then watched the snowboarders ski down the mountain above.

Fruit stands, the Columbia River, and 520 miles later, Jeff and I camped in an Army Corp campground on the Idaho border as we headed for Glacier National Park. Ken cut off 300 miles earlier heading for Yellowstone National Park. Jeff was on a tighter schedule (some folks have jobs) so after Starbucks coffee the next morning, he headed out while I did some internet work at Starbucks. 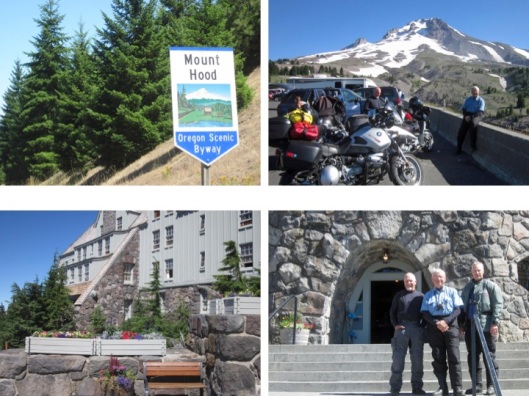 “My husband and I had our honeymoon at Glacier,” she said with a big smile.
That was Tammy who was on the road controlling traffic on Scenic Montana 200 for a bridge under repair. I rolled up to her STOP sign and we proceeded to have a 5 minute conversation while waiting for traffic to pass from the other direction. After asking me about my trip, she said:
“I’d love to go back to Glacier on a motorcycle.”
“May I take your photo?, I asked, just before I pulled out.
“Sure,”  she said, just before she turned her sign from STOP to SLOW.
“I’m going to post your photo  on the internet,” I yelled as I turned the throttle.
“Oh, noooo——–. 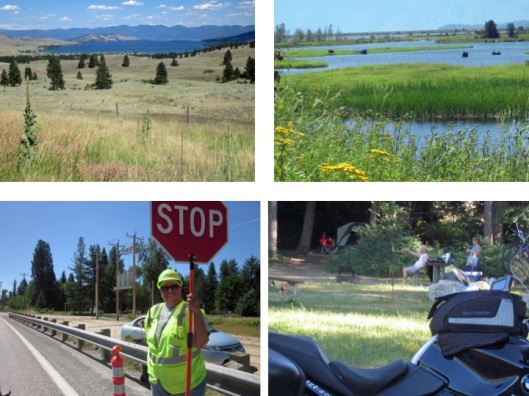 Five miles out of Sand Point an hour before I met Tammy, the construction traffic was so bad I turned around on route 2, went back to Sand Point and took the alternate route 200. The road was lonely and fast, and the scenery was gorgeous (Priest River Valley), just the way I like it. Route 200 ran along Lake Pend Oreille, a water-filled canyon gouged out by 1500 vertical feet of glacial ice. Then route 28 took me through the Flathead Indian Reservation toward Glacier National Park.

That’s Jerry in the white t-shirt, two sites down, seen just across the seat of Boxxer (photo). I finished setting up camp, had a nice shower, and was contemplating fixing Rice A Roni at the picnic table given I was too tired to drive somewhere.
“Are you camping alone?” Jerry asked. “We just finished dinner; we are leaving tomorrow and I hate to throw away the rest of these BBQ ribs and broccoli-noodle casserole.” “Would you like them.”
Arranged neatly next to the casserole in a two compartment plastic dish were some of the best looking ribs I have seen (I was hungry).
Jerry was from Great Falls, MT. He asked about my trip and how old I was given my long journey.
“Sixty-seven, he guffawed, “why you’re just a young whipper snapper; I just turned 80.”
“But you don’t look a day over 70,” I said.
“You must be fishing for a hundred bucks,” he responded.
“No, just dinner,” I replied.